Norwegian liabilities abroad ended at NOK 6 886 billion after the 2nd quarter of 2017. This was a decrease of NOK 92 billion compared to the 1st quarter of 2017. Other investments largely contributed to this decrease.

Not since the 2nd quarter of 2015 have Norwegian liabilities abroad been at an evidently lower level than it is now. During the last twelve months liabilities have dropped NOK 192 billion, according to new figures from the statistics Foreign assets and liabilities. At the same time have Norwegian assets abroad increased by NOK 748 billion. Net assets abroad are therefore much higher now than twelve months ago, NOK 6 931 billion to be exact.

As one can see from figure 1 below, other changes play a significant role in the development of net assets. Of a total increase of NOK 143 billion in the 2nd quarter, NOK 113 billion can be traced from other changes. The financial markets with rising market prices was the main driver for this increase. The Norwegian krone had mixed fluctuations against the main foreign currencies this quarter and therefore did not contribute either one way or the other. The remaining increase of NOK 29 billion is net lending which can be seen in the balance of payments. 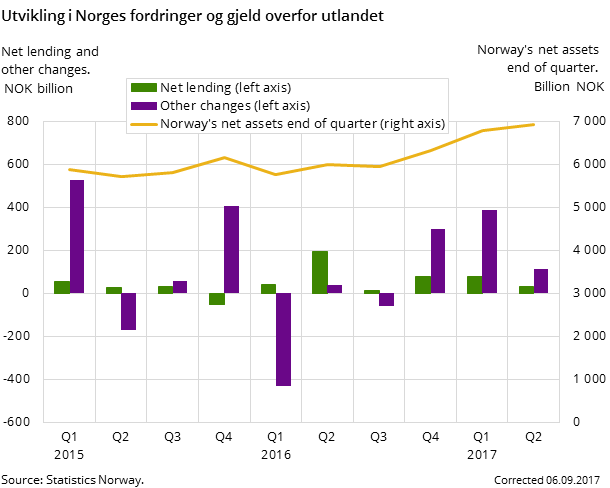