Indicators on education in the OECD, academic year 2008/2009

In 28 OECD countries, at least 60 per cent aged 25–64 years have attained upper secondary education or higher in 2009. 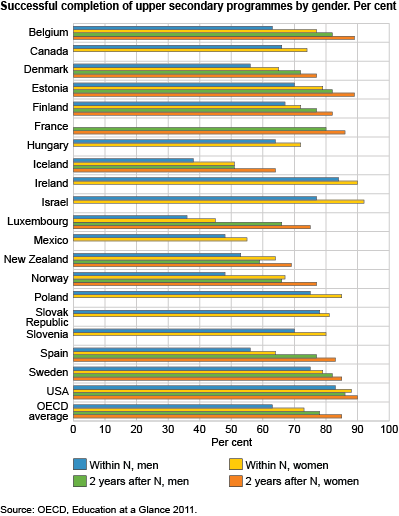 The proportion of students who complete their education within the stipulated time varies considerably among countries. In Norway, 57 per cent of the students who started their upper secondary education in 2002 had successfully completed within the theoretical duration of the programme – only Mexico (52 per cent), Iceland (45 per cent) and Luxembourg (41 per cent) had lower completion rates than Norway. In 20 OECD countries with available data, boys are more likely than girls to drop out of upper secondary school without a diploma. In Finland, the Slovak Republic and Sweden the difference between boys and girls is less than five percentage points. In Israel and Norway, girls outnumbered boys who successfully completed upper secondary education by more than 15 percentage points.

In some countries, it is relatively common for student apprentices to take a break from their studies and leave the education system temporarily.

OECD’s publication Education at a Glance 2011 also shows that 81 per cent of students have successfully completed their upper secondary programmes two years after the stipulated time of graduation – 13 percentage points more than the proportion of students who complete their programme within the theoretical duration. Giving two extra years to students to complete the programmes slightly changes the ranking of countries, with Estonia and the USA both at around 87 per cent, and Iceland in last place at 58 per cent (among countries with available data).

At a national level, Statistics Norway publishes data on the throughput of pupils in upper secondary education at a more detailed level.