Growth in the gross domestic product (GDP) for mainland Norway was 0.6 per cent in the three-month period September-November compared with June-August. After a strong growth from September to October, the mainland economy was roughly unchanged between October and November.

Underlying the increase in the mainland economy for the 3-month period September-November was a general growth for most industry areas, including various service industries. Overall, the three-month growth for both private and public services increased by 0.5 per cent. Production of other goods increased by 1.6 per cent and was driven by construction and electricity production. Electricity production alone boosted mainland growth by just over 0.1 percentage point. Manufacturing and mining grew by 0.4 per cent, and manufacturing groups supplying oil activities saw a particular increase. The gross product in petroleum activities and foreign sea shipping fell by 3.2 per cent in the period September-November compared to the previous three months. Overall, GDP increased by 0.1 per cent during the period.

Following strong growth from September to October, mainland GDP growth was at zero per cent between October and November. Furthermore, mainland GDP for the first 11 months of 2018 was 2.4 per cent higher compared to the same months in 2017.

Public consumption increased by 0.8 per cent in the period September-November.

Gross fixed capital formation increased by 5.6 per cent in September-November compared with June-August. For the same period, growth in public investments was 7.9 per cent, but this growth is explained in its entirety by the supply of combat aircraft registered in the investment figures in September. In October and November, public investments were at about the same level as each month from June to August.

Good monthly information for other investments is lacking. This means that information on planned investments, as reported by firms in the industry, is used for petroleum, manufacturing, mining and power supply investments. These figures indicate a growth in oil investments of almost 7 per cent for the September-November period.

Exports of traditional goods saw a clear increase in both October and November, but weak September figures led to a three-month growth in the September-November period of only 0.4 per cent. Imports of traditional goods rose sharply in October but declined again in November. For the three-month period September-November, imports of goods increased by 0.8 per cent.

With new monthly figures, come revisions. The statistics used will not normally be subject to a revision, but seasonally adjusted series may, however, be changed. This is a consequence of new information being incorporated into the seasonal adjustment. As additional months are included in the data, the effect of new observations will become ever smaller.

Quarterly growth for mainland GDP in Q3 published on 13 November has been revised upwards from 0.3 to 0.4 per cent. 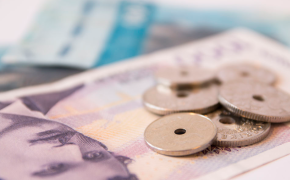 The balance of income and current transfers was historically high in the preliminary calculations for the 2nd quarter of 2018, with almost NOK 47 billion.