A total of 84 000 persons went small game hunting in the hunting year 2016/2017; an increase of 4 per cent from the previous year. The increase is mostly due to more grouse hunters.

In recent years, fewer and fewer grouses have been harvested, and the hunting bag has been at a record low, according to the statistics Active hunters. As a result of the decreasing population of grouse, the landowners in many places have limited the number of hunters. A total of 45 800 hunters went grouse hunting in 2016/2017, which is an increase of 12 per cent from the previous hunting year, according to the statistics Active hunters. For this reason, the number of small game hunters in general increased.

Figure 1. Age distribution in the whole population and among hunters

A total of 94 200 persons hunted cervids in 2016/2017. Although more red deer than moose are being shot, there are considerably fewer red deer hunters than moose hunters. The number of moose hunters has remained stable, and in the last hunting year 61 100 hunted moose. A total of 47 200 hunters participated in red deer hunting. The third most frequent type of hunting was roe deer hunting, which engaged 42 400 hunters, 15 900 of whom had yield from the hunt. Among the cervids, few hunters are allowed to hunt wild reindeer, and only 10 400 hunters took part in wild reindeer hunting in autumn 2016.

Figure 2. Number of active hunters by county of residence

Most hunters in rural areas 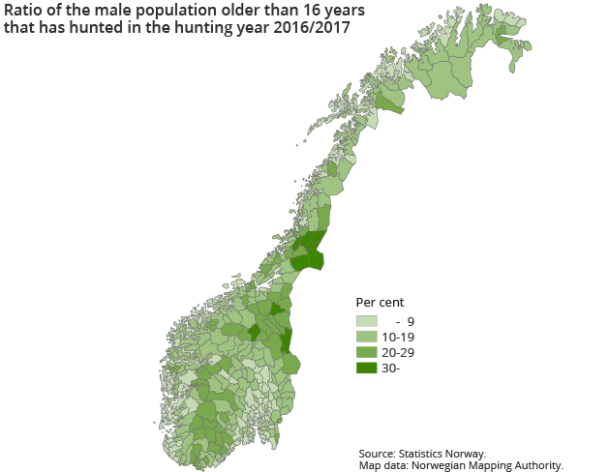