The business tendency survey for the third quarter of 2017 shows a moderate increase in total production compared with the second quarter of this year. From a significant drop in production, manufacturers of capital goods are now showing signs of improvement and the reduction in output is levelling off. The reduced activity among suppliers to the oil and gas industry since mid-2014 is therefore no longer curbing the overall manufacturing output to the same degree.

Producers of intermediate goods reported a growth in production in the third quarter. At the same time, there was a lower level of production among producers of consumer goods. The food and beverage industry in particular was a major contributor to the decline in consumer goods.

Moderate increase in new orders in the third quarter

Prices went up for both export and domestic markets for the manufacturing industry in the third quarter. Producers of intermediate goods and consumer goods saw an increase in prices in both markets. For producers of capital goods, there was still a negative trend in prices in both markets. Two likely explanations for the decline are the requirement for oil companies to reduce development and maintenance costs, and the fierce competition for supplier contracts in the oil and gas industry.

Positive expectations for the fourth quarter of 2017

The general outlook for the fourth quarter of 2017 is positive. The share of business leaders who feel optimistic about the coming quarter is approximately the same as in the previous survey. Industry leaders report that investment plans are adjusted upwards and new orders from both the domestic market and export market are expected to increase. The total stock of orders is also expected to increase. Meanwhile, employment will see a further drop. Producers of capital goods, intermediate goods and consumer goods are all optimistic about the fourth quarter.

The industrial confidence indicator for the third quarter was 2.3 (seasonally adjusted net figures), down from 3.7 in the previous quarter. This is slightly below the historical average of 3.0. Values above zero indicate that total output will grow, while values below zero indicate that total output will fall. International comparisons of the industrial confidence indicator are available from Eurostat (EU), The Swedish National Institute of Economic Research and Statistics Denmark.

¹ Industrial confidence indicator is the arithmetic average of the answers (balances) to the questions on production expectations, total stock of orders and inventories of own products (the latter with inverted sign).

The average capacity utilisationfor Norwegian manufacturing went up slightly, and was calculated to 77.8 per cent at the end of the third quarter of 2017, compared with 77.6 in the second quarter of 2017. This is below the historical average of 80.2 per cent. International comparisons of average capacity utilisation are available from Eurostat (EU).

Figure 6. Capacity utilisation in per cent for manufacturing

The average number of working months covered by the current stock of orders was 4.1 in the third quarter of 2017. This is the same value as in the previous quarter, and is above the historical average for the indicator of 3.9.

Figure 7. Number of working months covered by current stock of orders for manufacturing

The resource shortage indicator went up slightly compared with the previous quarter. There is still little shortage of labour, good access to raw materials and electrical power, and few industry leaders are reporting full capacity utilisation. At the same time, fewer business leaders report that weak demand or strong competition are limiting factors for production. 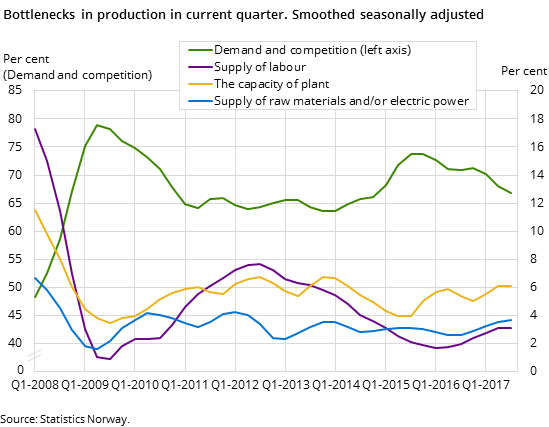 The survey data was collected in the period from 7 September to 18 October 2017.

Assessment of industries in Q2 2017 and the short-term outlook