Lower optimism in manufacturing for the next quarter

Norwegian industrial managers report an increase in the production level in the third quarter of the year. The general outlook for the fourth quarter of 2019 is considered to be positive by the majority of industry leaders, but the share of optimists are lower than in the previous quarter.

Flat development in the total stocks of orders

The flattening in the total stocks of orders is due to the fact that the growth in new orders has not been higher than the growth in deliveries in the third quarter. New orders from the export market have gone from growth to a flat development from the second to third quarter, which is due to reduced demand for Norwegian intermediate goods. It is especially industrial leaders within the industries basic chemicals and basic metals who report lower new orders for the export market. This decrease is probably due to lower international growth, which results in lower demand for Norwegian export goods. The decrease comes in spite of a weak Norwegian currency, which – in isolation – improves competitiveness. Industrial leaders report growth in new orders from the domestic market for the third quarter.

For more than two years now it has been reported growth in price level both in the home and export market for overall manufacturing. The growth rate has indeed decreased in the last year in both markets. The growth in the export prices are at very moderate level in the third quarter. Producers of consumer goods and capital goods report growth in prices in both markets while the producers of intermediate goods reports fall in prices in the export market and unchanged prices in the domestic market.

Diminished optimism for the fourth quarter

The general outlook for the fourth quarter of 2019 is positive for overall manufacturing, but the numbers of leaders that looks optimistic about the coming quarter is lower than in the previous survey. Still, the industry leaders report upward adjusted future investment plans, and it is expected new orders from both the domestic and the export market, but fewer leaders are sharing this opinion now than the previous quarter. However, the employment is expected to be unchanged in the fourth quarter. It is the producers of capital goods and consumer goods who are optimistic regarding overall manufacturing for the next quarter, while the producers of intermediate goods are now only moderate positive.

The industrial confidence indicator has decreased mainly because the total stock of orders has flattened out in the third quarter and because of diminishing expected growth in production activity in the fourth quarter. A decrease for producer of intermediate goods was the main cause of the fall of the industrial confidence indicator, but also capital goods show a decrease.

In figure 6 below shows how the indicators that represent resource shortage have increased since the bottom of 2016, while demand and competition represent a minor challenge for manufacturing 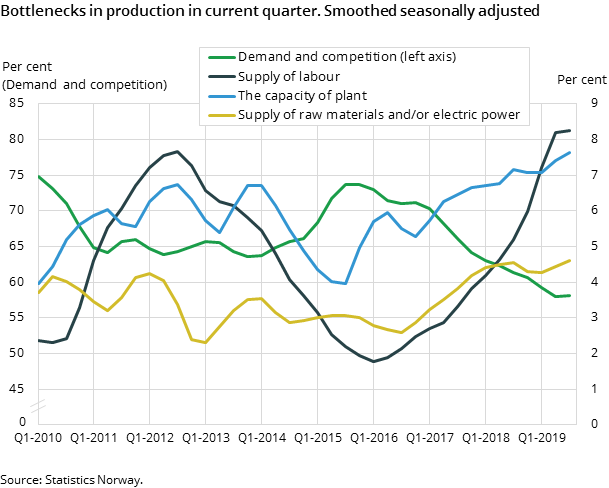 The survey data was collected in the period from 5 September to 17 October 2019.