A total of 10 300 persons were naturalised in 2018, which was a fall of over 50 per cent from the year before. The largest decline in absolute numbers was among Asian citizens, whose naturalisation went down by 6 300 persons in 2018.

Among those who were granted Norwegian citizenship in 2018, the largest group was made up of former citizens of Somalia, with 1 900 persons, followed by Eritreans with about 1 100, Iraqis with 600 and Afghans with 450, according to updated figures from Naturalisations.

Figure 1. The ten largest groups of natrualisation by previuos citizenshap 2017 and 2018

Among the countries with most transitions to Norwegian citizenship, Somalia was the only group with a moderate increase. All other groups had a decline, with Eritreans having the largest.

The number of transitions to Norwegian citizenship has increased in the years from 1977 to 2018, but with large variations during this period. The decline in 2018 is the biggest we have seen from one year to the next. Such fluctuations reflect not only how many people applied for Norwegian citizenship, but also whether the Directorate of Immigration processed fewer or more applications in the year compared with the previous year. 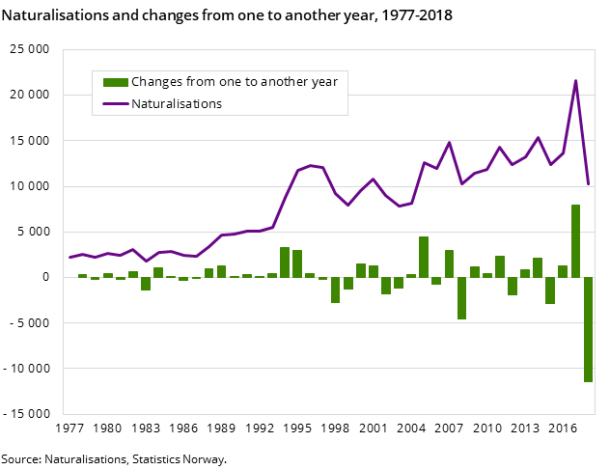 Among some groups, however, the proportion of women varies widely. There were three times more women than men among former citizens of Brazil, Ukraine and Thailand. However, Sudan and Afghanistan were two of the groups with the lowest proportion of women who received Norwegian citizenship.

In the period 1978 to 1982, most people who naturalised were under the age of 18 and accounted for more than 40 per cent of all transitions from 1977 to 1996. However, their proportion of naturalisation has declined in recent years.

In 2018, their share of naturalisation stood at 34 per cent. Among the countries with the highest naturalisation, Somalia has the largest proportion of children (47 per cent) and Pakistan the lowest (18 per cent).