We are still not back at the employment levels we had ten years ago. Nevertheless, we see in Figure 1 that there are improvements over the last couple of years, as 2019 is the best result for the first quarter of the year since 2016.

Figure 2. Persons with only lower secondary education, as a proportion of employed and unemployed

Movements in the labour market between the last two quarters

In addition to presenting levels, the Labour Force Survey also shows quarterly flows between the three labour market statuses (employed, unemployed, outside the labour force). Figure 3 shows these movements between quarter four of 2018 and the first quarter of 2019. Overall, there was an increase of 5000 persons outside the labour force. By only looking at the total this looks like a moderate change. However, by taking the full flows into account, we see that this total consists of 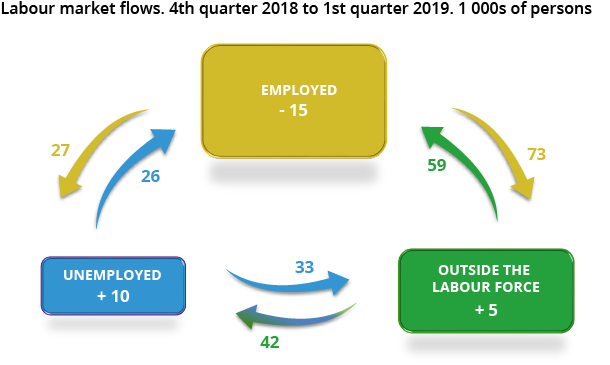