The text, figures and tables were corrected 1 December 2014 due to errors in variables FTEs, employment and wages. 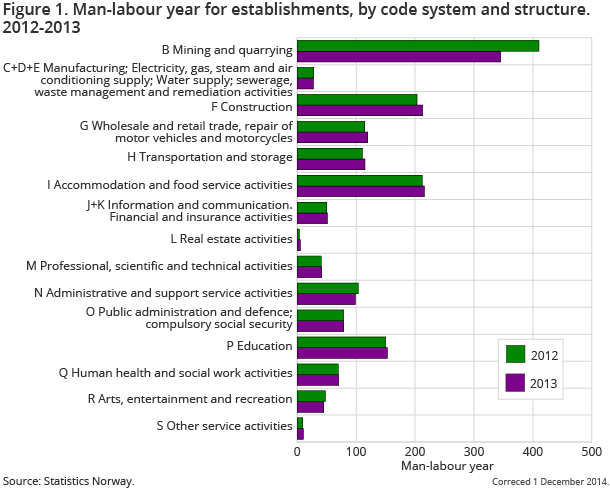 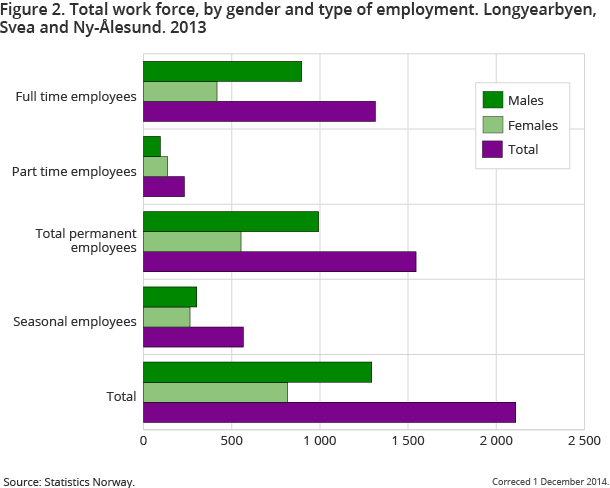 Several industries in Svalbard had an increase in turnover, but the results varied widely between the different main industries. With a high turnover of NOK 1.28 billion in 2013, mining and quarrying accounted for most of the increase in turnover, with NOK 389 million more than in 2012. This is due to higher production and sales volumes of coal mines. According to the annual report for Store Norske Spitsbergen Kullkompani AS, coal sales from Svea reached 2.1 million tonnes in 2013, compared with 1.25 million tonnes in 2012. Accordingly, mining and quarrying accounted for about 70 per cent of the total turnover growth in Svalbard in 2013.

The local KAUs in Svalbard performed a total of 1 593 full-time equivalents (FTEs) in 2013, down by 40; or nearly 2.4 per cent compared with 2012. The strongest decline was found within mining and quarrying, down by 65 FTEs, while total labour costs decreased by NOK 15 million to more than NOK 376 million in 2013. This is due first and foremost to the workforce reduction that Store Norske implemented in 2013.being laid off. The public sector occupied 52 per cent of total FTEs in 2013, compared with 54 in 2012. The number of FTEs in construction increased to 212.7, up by approximately 5 per cent, while wholesale and retail trade, repair of motor vehicles and motorcycles observed a modest employment gain, by 5 FTEs.

The number of permanent full-time positions in Svalbard was reduced by 41 from 2012 to 2013. Employment losses were found only among men whose number fell by 45. . . It is in mining and quarrying the downturn in permanent full-time positions was most noteworthy, du to the laying-off initiative implemented by Store Norske in 2013. The number of seasonal workers declined by 11 among men and increased by 8 among women. Accommodation and food service activities is the industry that frequently uses seasonal engagements. In 2013, the industry accounted for 30 per cent of all seasonal engagements in Svalbard.

Major investments in mining and quarrying

Expenditures on business investments for industries in Svalbard remained almost stable in 2013 compared with 2012. The decline in investment in most industries was offset by an investment increase in mining and quarrying. The industry invested over NOK 409 million, compared with about NOK 295 million in the previous year. The increase was mainly attributed to higher spending on Lunckefjell mining infrastructure and in the construction of the clean-up plant in Svea mine. In contrast, construction, information and communication and financial and insurance activities, and real estate activities registered gains in investments. These three industries combined invested a total of NOK 101 million in 2013, down NOK 110 million from 2012.