A higher balance of goods and services’ surplus and a somewhat stable investment income from abroad gave a strong current account balance for Norway in the 1st quarter of 2017.

After a longer period of decline in the surplus on the current account balance, there now seems to be a shift, with two quarters of growth. Higher prices on oil and natural gas, together with stable income from abroad have made important contributions to this development.

For more information about export and import, including price and volume considerations and seasonal adjustments, please see the quarterly national accounts.

When it comes to primary income and secondary income to and from abroad, there was a modest growth in both, with the income to Norway slightly higher, leaving the balance of income and current transfer with a growth of NOK 2.9 billion from the same period in 2016.

Due to new information, all quarters in 2016 have been revised since the BoP was published the last time on 1 March 2017.

The financial account shows increased investments on both the asset and liability side in the 1st quarter of 2017. Transactions in financial assets amounted to NOK 210 billion, while on the liability side the transactions amounted to NOK 83 billion. Other investments dominated on both sides, including other accounts receivable/payable, which had an increase of NOK 91 billion on the asset side and NOK 76 billion on the liability side. Here the general government sector including the Government Pension Fund Global (GPFG) and the Central Bank dominated. Loans to and from abroad increased by NOK 73 billion and NOK 29 billion respectively. Here the GPFG dominated with repurchase agreements (repos) on both sides. 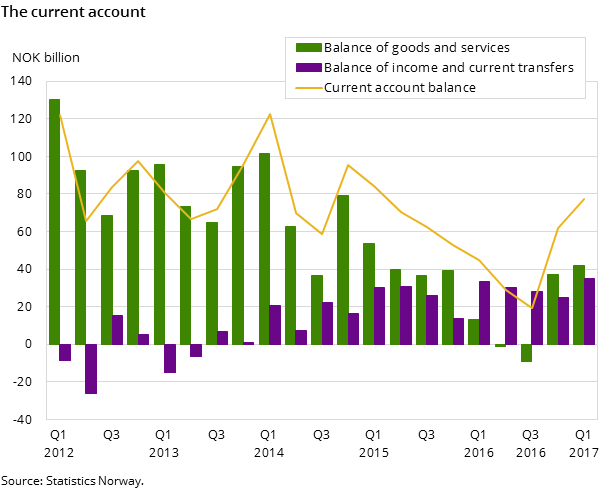