The expected years of schooling for a five year old child were 17.9 in Norway in 2002, while the OECD average was 17.2. Compared with the other Nordic countries, Norway had the lowest school expectancy. 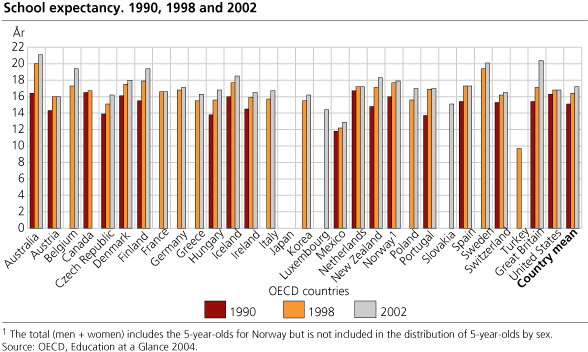 In 1990, the expected years of schooling in Norway were 16 years. This figure had risen to 17.7 in 1998. One important explanation for the increase between 1990 and 1998 is Reform 97, a reform that lowered the school starting age from seven to six.

In all OECD countries except Germany, Japan, Korea, the Netherlands and Switzerland girls were likely to spend more time in education than boys.

Majority of late teens in education

85.3 per cent of the Norwegian population aged 15-19 was enrolled in education in 2002, compared with an OECD average of 81.8 per cent. Eleven countries had a higher proportion of 15-19 year olds in education. In this age group more women than men were in education – 88.8 per cent of women and 81.8 of men respectively.

In the age group 25-29, nine countries had a higher proportion of students than Norway. Iceland tops the list with 36.5 per cent, compared with 14.2 per cent in Norway.

In all OECD countries except Poland, Turkey and the UK the proportion of foreign students was higher in 2002 than in 1998. In Norway, 4.8 per cent of students were of foreign nationalities in 2002, compared with 3.2 per cent in 1998.

Table 1 School expectancy. 1990, 1998 and 2002. Expected years of schooling under current conditions, excluding education for children under the age of five

Table 2 Percentage of the youth population in education, by age group and gender. 2002

Table 4 Percentage of citizens studying abroad in tertiary education, by country of study. 2002