Indicators on education in the OECD, academic year 2011/2012

Pupils and students are older in Norway

In 2012, 15 per cent of pupils who completed an upper secondary study programme in Norway were over 25 years old; one of the highest rates in the OECD and somewhat higher than the average of 5 per cent.

The OECD notes that the age of completion is sensitive to any changes in the education system, such as the introduction of new programmes and the lengthening or shortening of programme duration. Some educational systems are quite flexible in providing new opportunities to complete upper secondary education later on in life, leading to disparities in the typical age of pupils completing their studies.

In recent decades, almost all OECD countries have seen a significant increase in the educational attainment among their population. Tertiary education has expanded markedly, but in most OECD countries a large majority of adults aged 25-64 years has an upper secondary education.

The educational attainment trend has been similar in a large number of countries over the last decade; the share of the population aged 25-64 years without an upper secondary education has fallen, and the share of adults holding a tertiary qualification has increased during this period. The share of the population holding an upper secondary qualification as their highest attainment has remained stable. 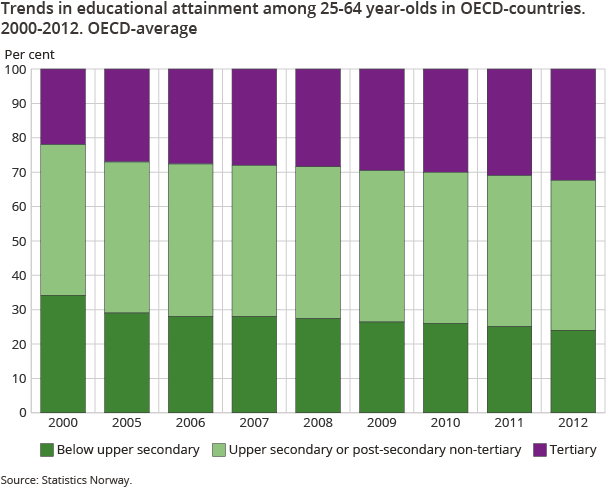 …but a growing number are attaining a tertiary degree

In OECD countries like Australia, Canada, Ireland, Israel, New Zealand, the Russian Federation, Spain and the United Kingdom, tertiary attainment rates were higher than upper secondary attainment rates in 2012. However, this was not the case in Norway and the other Nordic countries, where between 35-40 per cent had attained a tertiary education. In the period from 2000-2012, the share with a tertiary attainment rose by 10 percentage points as an average across OECD countries for the adult population aged 25-64 years.

7 out of 10 complete upper secondary within theoretical duration 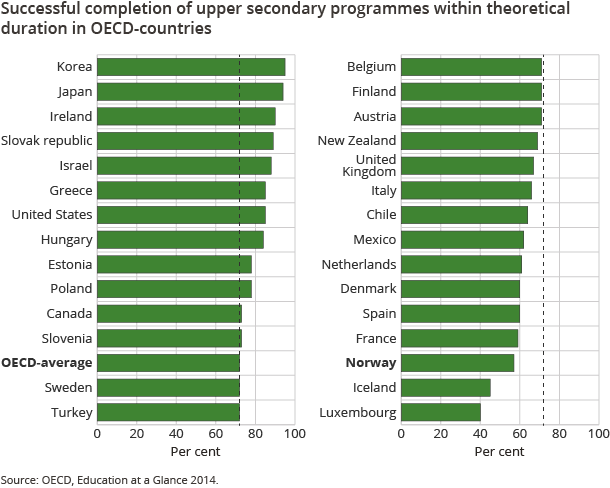 Differences in completion rates between general and vocational programmes

These system-level policies and access to employment for people with a low educational attainment could affect successful completion rates.