In Norway, the trend is similar – also for those students aged less than 20 years. A similar pattern is found in most OECD countries, in particular among those aged 20 years and older. In the 2003/2004 academic year, 29 per cent of all 20-29-year-olds in Norway were enrolled in education, compared with 26 per cent in 2001/2002. The average for all OECD countries has also increased during this period – from around 23 to 25 (1) per cent.

Other Nordic countries have larger participation rates in education than Norway for those aged 20 years and older. In Finland over 41 per cent of the population aged 20-29 years are enrolled in education, whereas Sweden has the largest proportion among 30-39-year-olds – with over 13 per cent. 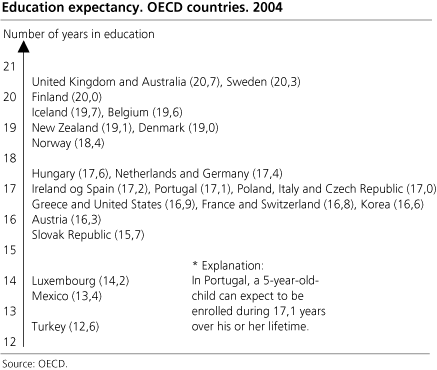 Expected years of education continue to increase. A five-year-old in Norway is, in 2004, expected to spend 18.4 years in education under current conditions. In 2001 and 2003 the expected duration of schooling was 17.9 and 18.2 years respectively. The increase is most noticeable within tertiary level of education, from 3.3 years in 2001 to 3.6 years in 2004. In eight OECD countries the expected duration of schooling is longer than in Norway. In Australia, Finland, Sweden and United Kingdom, a five-year-old is expected to spend more than twenty years in education.

Women are expected to spend more time in education than men in most OECD countries. In 1999, a five-year-old girl could expect to spend 16.9 years in education. In 2004, the expected years of schooling had risen to 17.8 years. School expectancy among men has not increased at the same rate.  Today, it is males who trail behind females in upper secondary graduation. Graduation rates for females exceed those for males in all OECD countries except Turkey. In Korea and Switzerland, graduation rates are similar for both genders. Since both education expectancy and upper secondary graduation rates are increasing among females, educational attainment is increasing simultaneously in OECD countries. In 2004, 34 per cent of women aged 25-64 years had attained a tertiary level of education. In 1998 the proportion was 28 per cent. The proportion of men with a tertiary education rose from 27 per cent in 1998 to 30 per cent in 2004. Most OECD countries follow a similar tendency.

Table 2 School expectancy. 2002, 2003 and 2004. Expected years of schooling under current conditions, excluding education for children under the age of five