In 2004/2005, more than 2.7 million students were enrolled outside their country of citizenship, nearly 5 per cent more compared with the previous year. Since 1999/2000, the number of foreign students increased by 50 per cent worldwide. In Norway, the increase was even higher.

In Norway, as for several other OECD countries, there has been an increase in foreign enrolments by more than 50 per cent since 1999/2000. In Norway, and for the other Nordic countries, this trend may be explained as no tuition fees are charged for domestic and international students in public tertiary institutions. Another trend especially noticeable in the Nordic countries is the increasing number of institutions now offering courses in English to overcome their linguistic disadvantage in attracting foreign students.

Few countries are by far most popular

Six out of ten foreign students choose to study in a relatively small number of countries. USA, United Kingdom, Germany, France and Australia host approximately 60 per cent of all tertiary students pursuing their studies abroad. Even though the United States, Germany and United Kingdom face a decline in foreign enrolment, they still maintain their positions as top five destinations. According to OECDs publication Education at a Glance 2007, the United States foreign student intake is still affected by the events of 11. September 2001. 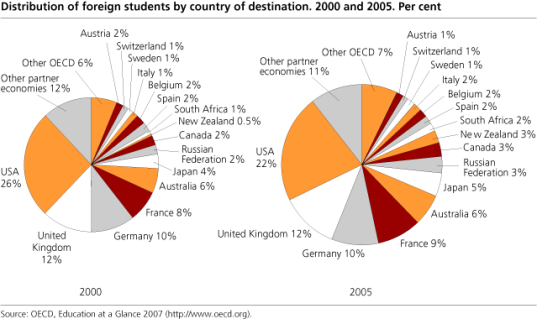