Indicators on education in the OECD, academic year 2007/2008

Increase of 20-29 year olds in education

On average for OECD-countries, 25 per cent of the age group 20-29 year-olds was enrolled in education in 2008 – an increase by nearly 8 percentage points compared with 1995. There were also significant differences in educational attainment between age groups.

In each of the Nordic countries at least 29 per cent of this age group was in education, and as many as 43 per cent in Finland and 37 per cent in Denmark. The lowest participation rates for this age group were found in Mexico, Turkey and United Kingdom – 11, 13 and 17 per cent respectively. 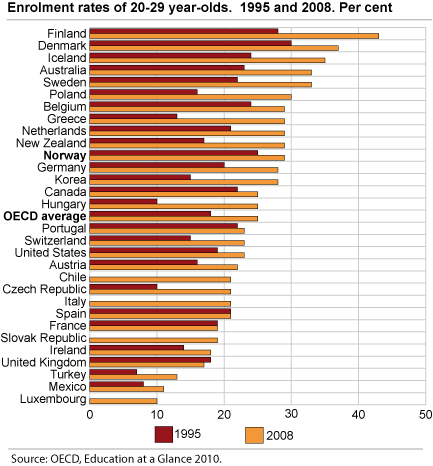 Differences between the age groups are less pronounced in countries with generally high levels of educational attainment. The difference was on average 12 percentage points for twelve OECD-countries where more than 80 per cent of all adults (25-64 year-olds) had at least upper secondary education. In Norway, 84 per cent of the population aged 25-34 had completed this level, and 78 per cent of all 55-64 year-olds.

A number of countries have noticed a drop as a preferred destination of foreign students over the last decade. The most notable decline was in the United States – from almost 26 per cent in 2000 to 19 per cent in 2008. More than 3.3 million students were studying abroad in 2008, and Norway hosted approximately 16 000 of these students – a proportion of 0.5 per cent of all foreign students.

The statistics are taken from Education at a Glance 2010 , published by the OECD.