Indicators on education in the OECD, academic year 2013/2014

In Norway women have the highest education, but the lowest wages

If you happen to be a tertiary educated woman in Norway, your average wage is 75 per cent of that of a similarly educated man. The wage gap between Swedish women and men is less prominent.

For the first time, there are more adults with tertiary qualifications than adults with training at upper secondary level in Norway. 42 per cent of adults aged 25–64 have attained higher education, well above the OECD average of 33 per cent, according to the OECD report Education at a Glance 2015. However, there are great gender differences in relation to both education and income among the Norwegian population. 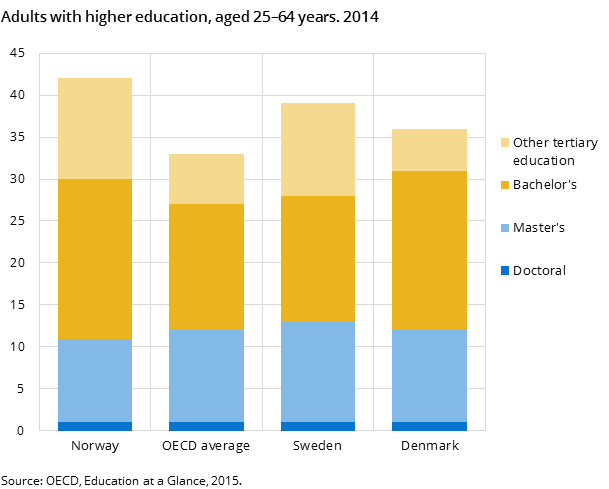 Although a large proportion of adults in Norway have higher education, only 10 per cent holds a master's degree or equivalent. Figure 1 illustrates that this is a slightly lower share than in Sweden (12) and Denmark (11), and also below the OECD average of 11 per cent.

Young women in Norway on the OECD podium

There are large gender differences in education among adults aged 25–64 in Norway. In 2014, 46 per cent of adult women had attained higher education, as opposed to 38 per cent of men.

There was a greater share of young women with higher education in all OECD countries in 2014. Only Switzerland had the same share of highly educated young men and women (46 per cent).

Wage gap between men and women in Norway

Despite their higher qualifications, women’s economic outcomes lag behind men’s. Women with higher education between the age of 25 and 64 working full time earn only 75 per cent of what similarly educated men earn. The situation is virtually the same in Denmark (74 per cent) and Finland (76 per cent), while the wage gap between Swedish women and men is substantially less. Swedish women's income is 83 per cent of the income of Swedish men. Figure 3 illustrates that the OECD average is 73 per cent. 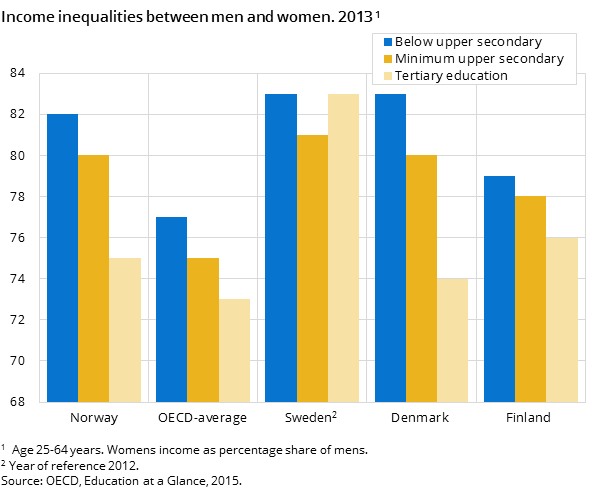 In most OECD countries the income disparities between men and women increases in line with higher levels of education. The trend is the same for Norway. A woman without secondary education earns 82 per cent of the salary of a similarly educated man. The corresponding figure for a woman with a minimum of upper secondary education is 80 per cent.

More popular with vocational programmes in OECD than in Norway

Figure 3 demonstrates that compared to our Scandinavian neighbors there are larger gender differences between general and vocational upper secondary graduates in Norway. In line with women being more educated, 58 per cent of graduates from general programmes in 2013 were women. On the contrary, 62 per cent of graduates from vocational programmes of study at the secondary level were men. 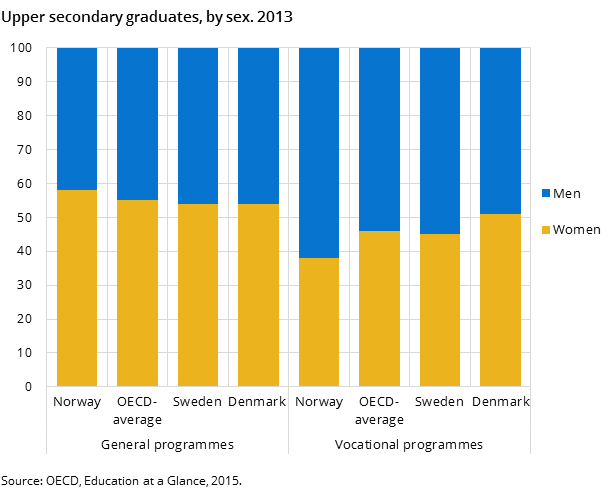 Moreover, the share of students who graduated from vocational programmes in Norway has decreased from 2005 to 2013. However, in OECD as a whole there has been an increase. OECD emphasize that the increase in many countries is due to a rising recognition of good initial vocational education being a contributor to a competitive economy.