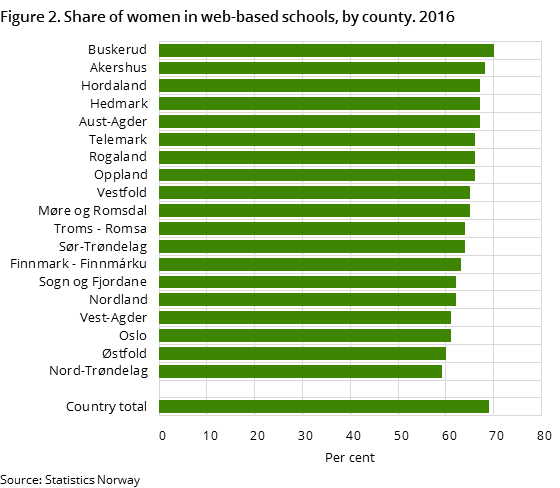 During the academic year 2015/16, there were around 9 700 course completions. There was also an overrepresentation of women who completed courses in this year, with 62 per cent. Women represent a majority within all fields of education, except for the fields of «transport and communications, safety and security and other services» and «natural sciences, vocational and technical subjects». In these fields, 92 and 60 per cent of the courses are completed by male participants. In the field of education, on the other hand, the share of female participants is 91 per cent, whereas women represent 84 per cent of the completions in the field of «health, welfare and sport».

1 Correction in the text.

Data for 2016 are missing for the web-based school Industriskolen. This school had around 800 participants in 2015, the majority of whom were men. Taking this into consideration, there is nevertheless an increase in the share of women in web-based courses from 2015 to 2016.