Norway has a high educational attainment compared with other OECD-countries. Approximately 86 per cent of the population in Norway aged 25 to 64 years had at least completed an upper secondary education in 2000. The country mean across OECD was 64 per cent. This is presented in the OECD-publication "Education at a Glance" which is published today.

Only the United States (88 per cent), Switzerland (88 per cent) and the Czech Republic (87 per cent) had a higher portion of the population aged 25 to 64 years, with at least an education on the upper secondary level. Portugal, Mexico and Turkey had the smallest attainment rates on at least upper secondary education, respectively 20, 22 and 24 per cent. In Sweden, Finland, Denmark and Iceland the percentages were 81, 74, 81 and 57 respectively.

Within the age span 25-64 years the educational attainment is higher among the young people. 94 per cent of the population in Norway aged 25-34 years had at least completed an upper secondary education in 2000. Among the population aged 55-64 years there were 70 per cent with an equivalent education. For this age group the OECD average was 49 per cent, while the United States was at the top with 82 per cent. 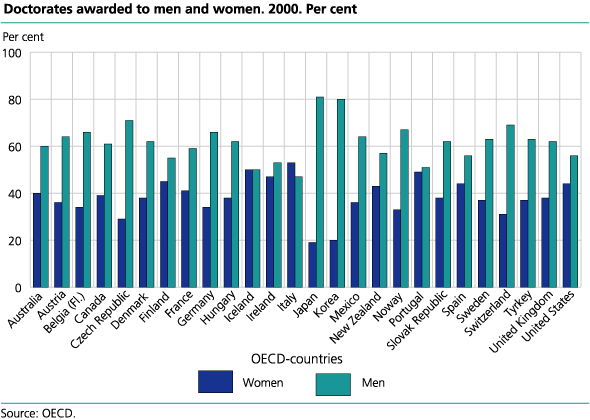 Two-thirds to earn doctorates are men

Even though more women than men complete an education on upper secondary level and tertiary level, a majority of men are awarded with advanced tertiary degrees in Norway. 67 per cent of the advanced research degrees in Norway were awarded to men in 2000. Men remain more likely than women to obtain advanced research qualifications in all OECD countries, with the exception of Italy and Iceland. Italy, Iceland, Portugal and Ireland have the largest portion of women completing at this level 53, 50, 49 and 47 per cent, respectively. The lowest shares of women are found in Japan and South Korea with 19 and 20 per cent. Participation in education Participation in education tends to be high in Norway even beyond compulsory education. In 2000 86 per cent of the population aged 15 to 19 years were participating in education. The sharpest decline in participation occurs not at the end of compulsory education but at the end of upper secondary education. In Australia, Belgium and the Nordic countries, one out of four 20 to 29-year-olds participates in education.

Table 1 Percentage of the population that has attained a specific level of education, by age group and gender. 2001