Did you know these facts about students in Norway?

Students in Norway differ from students in many other European countries. In Norway, there are more older students, it is less common to live at home with parents, and students spend a lot of time on paid work.

The patterns we find in Norway are also in evidence in the other Nordic countries, as results from the Eurostudent survey show. Did you know, for example, that…

Every second student is aged 25 or over 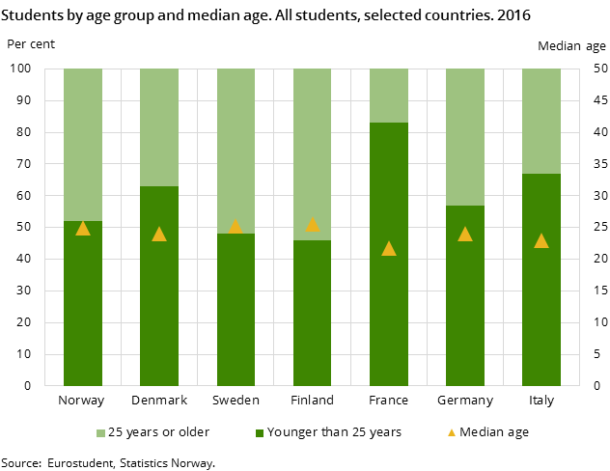 Students in Italy and Germany are also somewhat younger than students in this country. Comparing Norway to the other Nordic countries, we see that also in Finland and Sweden, more than half of the students are 25 years or over. The exception in the Nordic context is Denmark, which includes only full-time students in the survey. In the other Nordic countries, part-time students are also included, and the share of part-time students increases with students’ age. At the same time, we know that it is common for students to take a break after completing their upper secondary education, which can also explain differences in students’ age between countries. Twenty per cent of students in Norway have taken a break of more than two years before starting their studies, and this is also common among our Nordic neighbours.

Eurostudent is a survey of students in different European countries. The purpose of the survey is to collect comparative data on the social dimension of higher education in Europe. This includes students study situation, but also their economic situation and housing situation.

Norway participated in the Eurostudent survey for the first time in the survey conducted from 2004-2007, which was the third of its kind. The sixth survey is being carried out in the period 2016-2018, with 28 participating countries. Of 24 000 students in the Norwegian sample, 37 per cent answered the survey. International results from Eurostudent VI were published at the beginning of 2018.

When comparing the results across countries, it should be borne in mind which students participated in the survey. For instance, Denmark only includes full-time students, and Finland only includes students studying for a bachelor’s or a master’s degree.

Norway does not only differ in the age distribution of students, but is also among the countries with the highest share of female students – 6 out of 10. Read more about students in Norway and learn what they study here. Are you interested in learning more about students with impairments? Find out more about this group here.

Only 10 per cent live with their parents

Students in Norway are not only older than students in other countries, their housing situation also differs. Every tenth student in Norway lives with his or her parents, and the comparable figure in Denmark, Finland and Sweden is also below 15 per cent, as shown in figure 2.

Figure 2. Share of students living with their parents. All students, selected countries. 2016 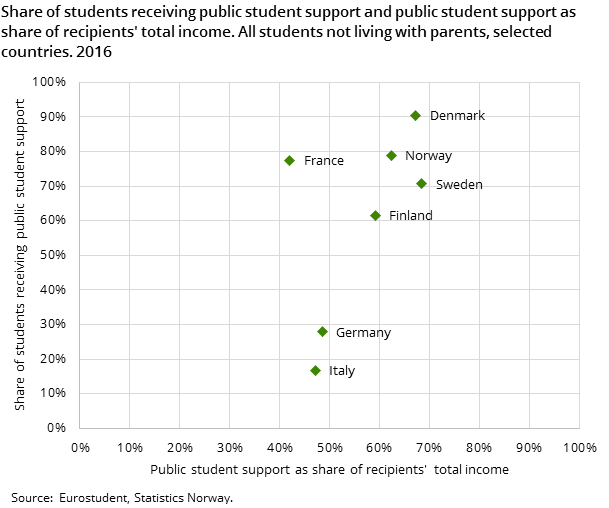 This means that other sources of income are important. In Germany, France and Italy, family support is an important income source. In the Nordic countries, on the other hand, students are more economically independent from their families, and the income from paid work is the most important source of income. Here you can read more about students’ resources and expenses.

Table 1. Share of students with paid work during the entire semester. All students, selected countries. 2016

Although it is common to work in Norway, this does not mean that students spend less time on study-related activities compared to students in other countries. However, there are differences in how time spent on studies is divided between time spent on taught studies and personal study activities. Figure 4 shows that the combined workload of studies and paid work is fairly equal in the different countries, varying between 40 hours a week in Sweden and 45 hours a week in Denmark.

It is also common for full-time students to work, with 1 in 3 having paid work alongside their studies. How much students work varies between the different fields of study and study programmes. However, time spent on paid work influences how much time students spend on their studies: if they work less than 10 hours a week, they spend less time on study-related activities than students who do not have paid work. Here, you can read more about paid work alongside studies.

1 Question not asked in Germany and Italy.

Figure 5. Share of students being satisfied with the quality of teaching. All students, selected countries¹. 2016 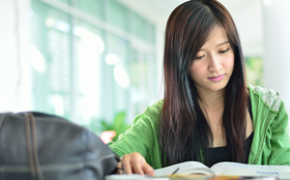 Fulltime students working more than 10 hours a week spend on average less time on their studies than students who do not work.