The number of pupils completing upper secondary school and qualifying for university or obtaining vocational competence within five years has increased to 73 per cent over the past two years, up from a previously stable level around 70 per cent. 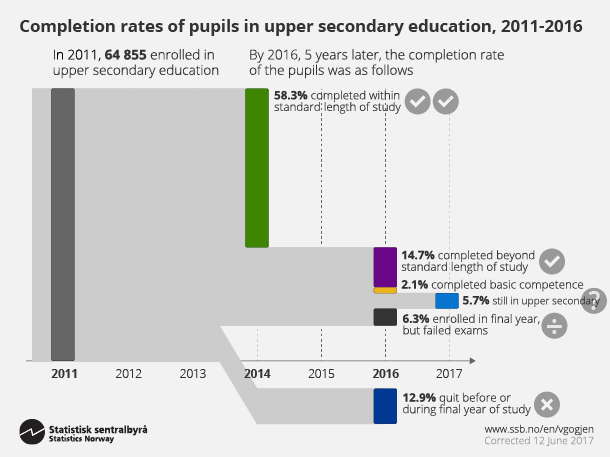 Since 2010, various national programmes have been put in place to improve upper secondary completion, notably "Ny GIV" from 2010 to 2013, followed by "Program for bedre gjennomføring i videregående opplæring". but this article does not draw causal conclusions about the effects of such programmes.

In the period covering the cohorts starting their upper secondary education from 2006 to 2011, completion rates have improved in all counties, but Finnmark has seen a particularly sharp increase, from around 50 per cent for the 2006 cohort to more than 64 per cent for the 2011 cohort. 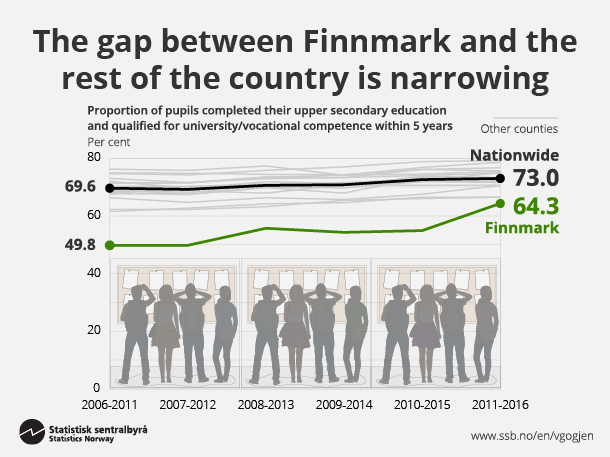 The increase in Finnmark between the 2010 and 2011 cohorts alone has been more than 9 percentage points. Overall, the completion rate in Finnmark is still well below the national average, but less so for pupils enrolled in general programmes.

Figure 3. Pupils who started in 2011, and the proportion who have completed 2016. By education programmes and gender.

Figure 4. General studies. Pupils who started in 2011, and the proportion who have completed 2016.

Figure 5. Vocational studies. Pupils who started in 2011, and the proportion who have completed 2016.

Figure 6. Pupils who started in 2011, and the proportion who have completed 2016. By school points