The statistics has been discontinued.

Number of old age pensioners up in 2013

Statistics on the Norwegian Labour and Welfare Administration (NAV) show a continued increase in old age pensioners as well as in the expenditures on pension benefits in 2013. 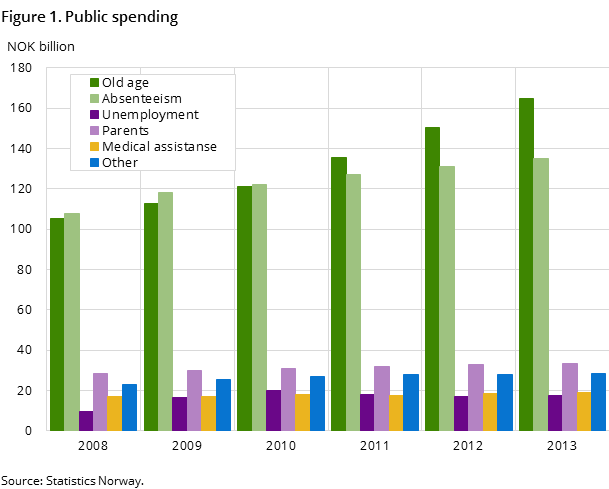 The figure shows the development in the public spending that the Norwegian Labour and Welfare Administration (NAV) paid out in the period from 2008 to 2013 in connection with:

It is particularly expenditures in connection with old age that make up the largest share of the expenditure by the Norwegian Labour and Welfare Administration on the population.

Old age pension expenditure in 2013 was NOK 164 billion; an increase of more than 9 per cent. Old age pension is a right that is accrued and which is affected by how the pension system is modelled, as well as the number of people who are making use of the rights they have accrued.

Old age pension made up more than 41 per cent of the total expenditure by the Norwegian Labour and Welfare Administration on the population in 2013. There was an increase in expenditures on pension benefits in the period from 2008 to 2013 of 56 per cent, while the other social security and benefit schemes increased by 25 per cent in the same period.

Child benefit is a national insurance benefit that is paid to all persons with children under 18 years. In 2013, there were 667 978 recipients of child benefit. The corresponding figure in 2012 was 660 786, so the number increased in 2013. There was also an increase in the number of recipients of cash-for-care benefits; 16 207 persons received this in 2013.