Care centres for minors are part of the Child Welfare Services, and therefore included in these statistics. The large influx of refugees that came to Norway in autumn 2015 caused a significant growth in the number of unaccompanied minors in such care centres, from 112 in 2014 to 744 in 2015. Excluding the unaccompanied minors, the changes from 2014 to 2015 are small.

Fewer bed-days in publicly-owned institutions in most regions 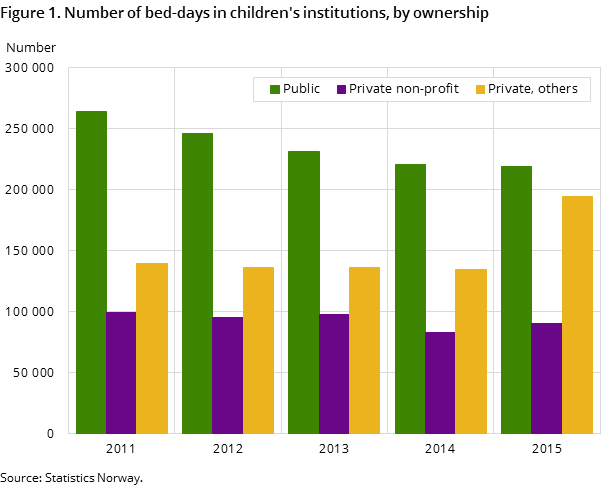 Bed-days in publicly-owned institutions, excluding stays in care centres for minors, have declined by 15 per cent in the North region, 9 per cent in the West region, 6 per cent in the South and the East region. In the Middle region, the number of bed-days was stable, and in Oslo there were an increase of 6 per cent.

Why are children placed in institutions? 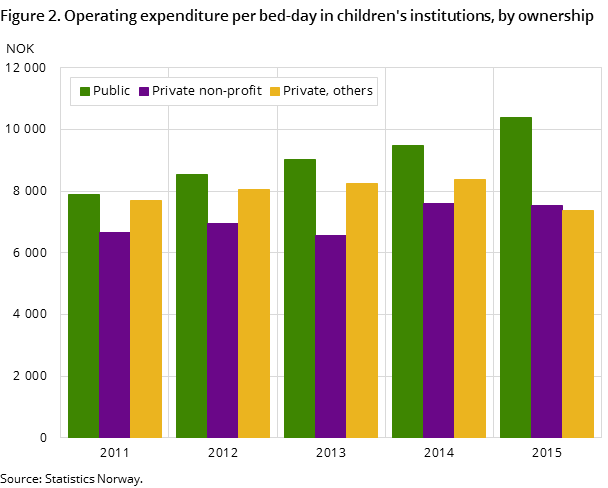 A total of 1 841 children were institutionalised at the end of 2015, of which 744 were unaccompanied minors placed under section 5A-1 of the legislation on child welfare services. Among the rest of the children, care stays were the most common type of stay (34 per cent). Voluntary stays accounted for 33 per cent and acute stays 18 per cent. Behavioural stays accounted for the remaining 15 per cent of total stays.

Sixteen per cent of all resident children were aged 12 years or younger. The share is about the same among the unaccompanied minors.

More boys than girls were institutionalised (70 per cent boys), but excluding unaccompanied minors, boys made up 54 per cent.

There was an increase of almost 7 per cent in the number of contracted man-years adjusted for sick leave and maternity leave in children’s institutions between 2014 and 2015.

There is a new variable in the activity-tables in Statbank (not for expenditures and man-years); Type of institution. This variable shows the distribution between Children's institutions (including Family support centres) and Care centres for minors.

The main source for information about wage earners in the statistics is the register-based employment statistics. From the year 2015, these statistics are based on a new data source for employees. Until the end of 2014, the main data source was The Central Register on Employers and Employees (EE register), produced by the Norwegian Labour and Welfare Organisation (NAV). In 2015, this reporting to NAV was coordinated with the reporting of earnings and personnel data to the Tax Administration and Statistics Norway. This common reporting system is called “a-ordningen”. “A-ordningen” provides a better data basis compared to the EE register, as it is more accurate on the individual level in addition to covering a greater number of employees.