A sixth of mainland Norway is protected areas

Protected areas comprise more than a sixth of mainland Norway’s total land area, which is triple that of 2000. In recent years there have only been minor increases, with 0.3 per cent in 2016, roughly the size of the Norwegian municipality of Bærum (188 km2).

New areas gaining protection in 2016 are all in mainland Norway. These are mainly nature reserves, but there are also two new national parks.

1 Areas on Svalbard are protected according to the Svalbard Environmental Protection Act and areas on Jan Mayen are protected according to the Act. of Jan Mayen and are not included.
2 Consists of flora and fauna protection areas (biotop protections). Since 2006 nature relics with an area protection and biotops protected by the Act relating to Salmonids and Fresh-water Fish and the Wildlife Act have also been included.
3 Areas with flora- or fauna protections are also included.
4 From 2012 the statistic/area are calculated by the projection ETRS_1989_LAEA. Earlier year has been calculated by the projection WGS_1984_Zone_33N. This will may lead to å differences in the area.

Two new national parks have been formed in 2016, “Jomfruland” on the coast of Telemark, and “Raet” on the coast of Aust Agder. The increase in protected area is still small, 10 km2, as the parks span a large number of islands. Areas of sea water are generally excluded from the statistics for protected areas, only land and freshwater are included.

For Norway including Svalbard and Jan Mayen, national parks make up the largest area out of the total protected areas, with 45 700 km2. Of this, 31 300 km2 is on the mainland, with approximately 14 400 km2 on Svalbard.

Norway has 46 national parks; 39 on the mainland and 7 on Svalbard.

Differences between counties in mainland Norway 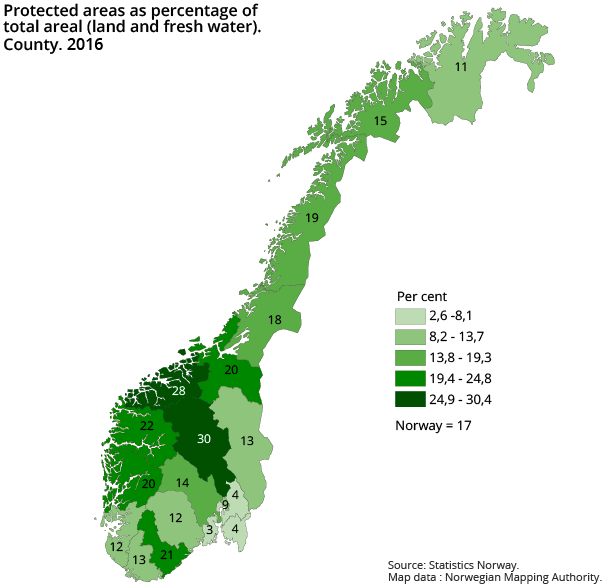