High level of social participation among the employed

Among the Norwegian population working full time, five out of ten are active members in at least one organisation, compared with three out of ten of unemployed or disabled persons. The employed also have better social networks and higher inter-human trust than the unemployed and disabled.

Athletic club members are the most active 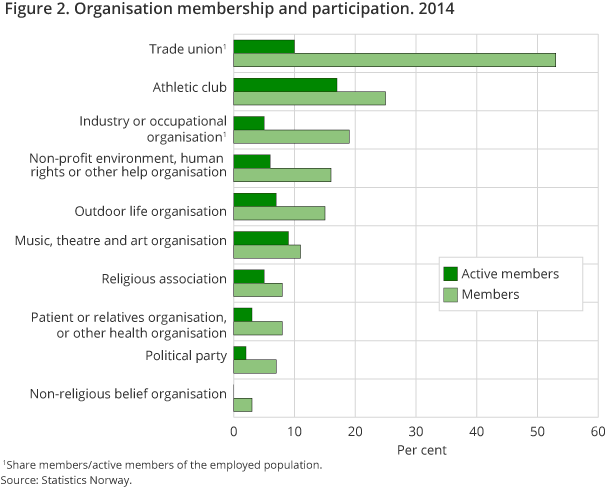 Few unemployed persons perform unpaid work - but those who do, contribute the most

Four out of ten Norwegians contributed with 78 hours on average of unpaid work for an organisation during the past year. This is the same level as in 2011. Comparing groups with different self-defined economic status, a smaller percentage of disabled, old age pensioners and unemployed contributed with unpaid work than the employed and students. The proportion providing unpaid work is lowest among single elderly people aged over 66, and the highest share is among families with children. However, the survey shows that the average number of hours spent on unpaid work for single people over 66 years is up to 40 hours more than the average in the population. Single people over 66 years contributed on average 118 hours of unpaid work, and the disabled and unemployed contributed on average 114 hours each. 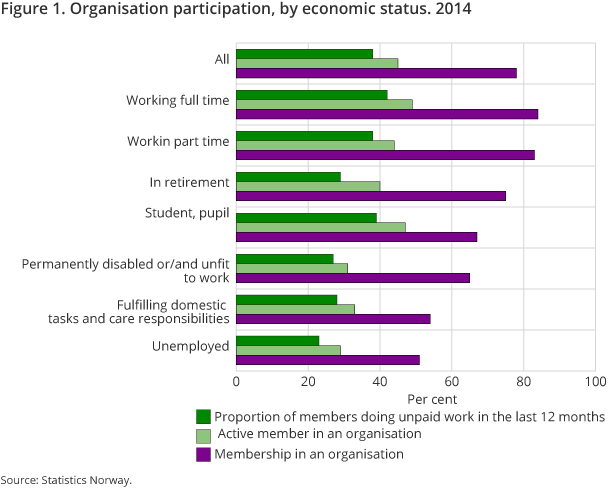 13 per cent have contacted a politician or public officer

Seven per cent of the population are members of a political party, and 2 per cent consider themselves to be active members. The Survey of Living Conditions also examines other forms of political influence. Despite a low membership share, one in ten Norwegians volunteer in political parties or groups in order to influence an issue (see Figure 3).

Direct contact with a politician or public official to influence an issue is the most commonly used channel. Thirteen per cent of the population has contacted an official in the last year. It is mainly males aged 45-66 years who make use of this channel, with 21 per cent of this group reporting direct contact. A post on the Internet and volunteer work to influence a particular issue is more popular among those younger than 45 years.

Unlike organisational participation, the Survey of Living Conditions shows that the unemployed and disabled participate politically to influence a particular issue on an equal footing with those in employment. Looking at the proportion that has posted on the Internet with the purpose of influencing an issue, the proportion is larger for the unemployed than employed (13 and 9 per cent respectively). 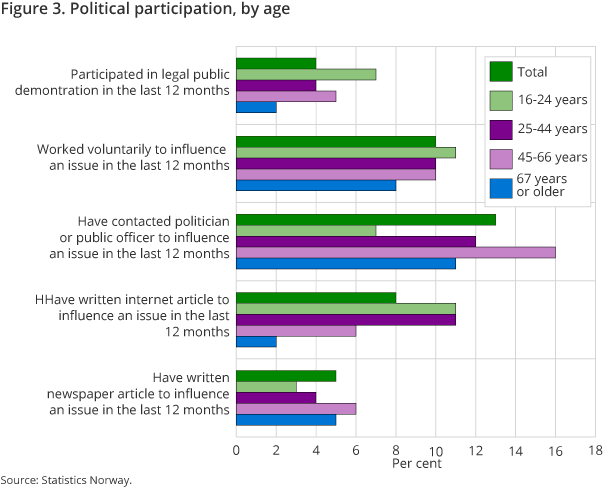 Through participation in civil society, social relationships can be built that contribute to an extended social network and increased confidence. An important characteristic of social network is greater access to counselling and practical help. In Norway, most of the population have someone to ask for practical help. Nine out of ten know someone they can ask for help with maintenance or repairs to their home (see Figure 4). Just as many Norwegians have friends or family who can help with the transport of larger objects. Eighty-four per cent of the population has someone to turn to if they need advice regarding health and disease. Eighty-nine per cent have someone to ask if they need advice in connection with a serious conflict.

The proportion that has access to counselling and practical help decreases with increasing age. Couples have a greater degree of access to practical help compared with single people. The employed have someone they can consult with to a greater extent than the unemployed and disabled. Nine out of ten employed persons know someone they can ask for help with maintenance or repairs to their home, or help with the transport of larger items. For the unemployed, this applies to eight out of ten. 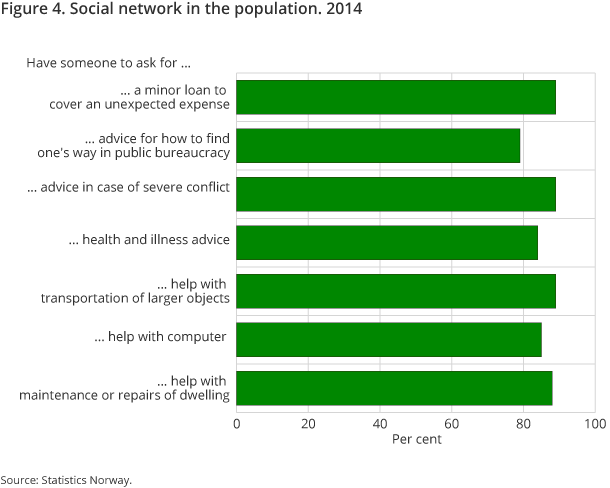 We have tried to measure the inter-human trust in Norwegian society through two questions. In the first one we ask the interviewee to state, on a scale from 0 to 10, if most people can be trusted (10) or if one can never be too careful (0). The average score is 7.3. In the other question, we ask the person to evaluate whether people will treat you fairly (10) or will exploit you (0). The average score on this question is 7.6. Compared with other European countries and the results from 2011, the inter-human trust in Norway is stable and relatively high (European Social Survey 2012). 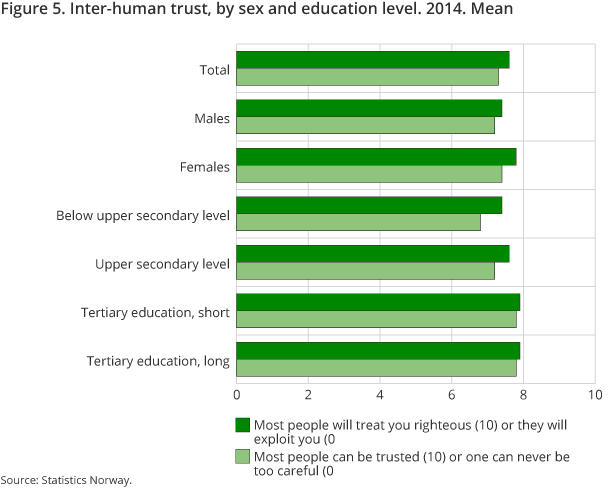 Fifty-five per cent of the population belong to a religion or a belief, and 17 per cent attend religious meetings at least once a month. A higher share of women (59 per cent) than men (50 per cent) belong to a religion. There is also a clear correlation between religion and age. Agder and Rogaland have the highest meeting activity, with three out of ten attending religious meetings at least once a month. Trøndelag and Northern Norway have the lowest meeting activity.