Revised figures for 2020 were published 7 October 2021. Due to deficiencies in the data base, figures for 2020 on agriculture an horticulture total, forestry total and other gainful activities total were 0,01-0,77 per cent too low.

Next update: Not yet determined

Selected tables and figures from this statistics

The aim of the census is to give a view of base of resources and production, and operational and environmental conditions in agricultural business. Additionally, the census shall give a historical view of the development and how farming is conducted in Norway.

Holding: Business with agricultural activity, included animal husbandry and horticulture. The holding comprise all activity operated as one unit under one administration with common use of production means, and which is not depending on regional borders.

The holder(s): The one/those who is responsible for the agricultural activity.

Rented agricultural area. Agricultural area where the owner and holder of the area are different persons, including legal persons. Include all rented agricultural area regardless of whether remuneration is paid or not. Both leasing of a complete holding and rent of additional land to an existing holding are regarded as rented agricultural area. If the spouse of a holder is the owner, the area is considered as owned. If a partner of joint operation etc. owns area that is in use on the joint operation, the area is considered as owned. A lease refers to an agricultural property’s main identification number in the Farm Register. This means that if one holding has more than one rent agreement from the same property, the agreements are only counted as one lease. However, one property may rent out area to several holdings and this is counted as one lease for each of the holdings involved.

Other gainful acitivities/Supplemantary industries are activities or businesses operated on the holding. The activity ought to be based on the holding's resources (area, buildings, machinery and/or products/raw materials), and can be of both small and big extent.

Greenhouse: an area that can be entered without having to remove a glass or plastic cover. Areas with a lower ceiling height than this are defined as hotbeds and are not classified as greenhouses.

Nursery: a business that cultivates ornamental plants, fruit trees and berry bushes. Forest nurseries are not included in the census.

Mainly following groupings are used in the tables: County, agricultural area in use.

Municipality. Other regions at lower level will be considered if it does not get into conflict with confidensiality.

Complete censuses have been conducted every tenth year since the beginning of the 20th century. All agriculture properties and agricultural holdings are included in this years census.

Information is forwarded to EUs statistical office, Eurostat in accordance with specifications given in the i regulation. Results will also be a part of data deliveries to FAO.

Deidentified data file with data from registers and questionnaires will be filed in Statistics Norway.

The aim of the census is to give a view of base of resources and production, and operational and environmental conditions in agricultural business. Additionally, the census shall give a historical view of the development and how farming is conducted in Norway.

The Census of agriculture is financed by own resources in Statistics Norway's budget as well as contributions from Norwegian Envrionment Agency and Ministry of local Government and Modernisation.

Important users of results are administrative agencies, the governments agricultural authorities and the farmers unions. Data will be used in planning, investigations, support for desicion making and research etcetera. Data is a very important contribution in the negotiations between the farmers unions and the Government

A census makes it possible to publish results on low geographical levels which makes the municipality bodies capable to study development at smaller regions than county.

The Census of Agricultural is close related to other statistics published annually. In the work with the census, one will make it possible to see the statistics in connection with each other.

Census of agriculture comprise all agricultural properties and all holdings with a minimum production (area, animal husbandry).

All information about farmers, owners and properties are collected from different registers. Some information from the holdings are collected on own questionnaires (unfortunately only available in Norwegian here: https://www.ssb.no/lt2010 ).

Data collection can be divided in two.

Many registers are merged with data from the questionnaire:

Census of agriculture is a complete census. To be able to publish preliminary figures at an early stage, a sample is drawn from all received questionnaires. The sample comprise 7 850 holdings. The sample is stratified by size of agricultural area in use, what kind of production and county.

When final figures were produced, the figures for labour input were lower than expected. The difference was due to the sample that did not intercept changes and specialisation in the population. The difference is linked to "other prcductions" which includes to many different productions.

The questionnaires were sent to the holdings in the population. The counting date of the Census was 1st October 2020.

Information from registers are collected by different divisions in Statistics Norway.

Many different controls and checks have been conducted to make sure quality and consistence within one report and between different reports and registers. A new automatic data editing system was introduced to control, correct, edit and imputate missing or erroneous values. The system imputated values based on logical controls, average values, proportional frequency distribution and by "nearest neighbour" principles (impute values from a holding very similar to the holdings that is edited).

In a complete census the calculations are rather simple with addition, grouping and cross tabulating.

In the sample (preliminary figures) the population are stratified by county, size of agricultural area in use and production. A weight is calculted for each holding.

Conversion of energy contents to kWh in 2010 was based on factors described in About the statistics regarding the Energy balanse and energy account, see https://www.ssb.no/english/subjects/01/03/10/energiregn_en

Results from the census are restrained if there are to few observations behind the results, or if the results can be traced beck to single respondents.

Censuses in primary industries have been conducted since 1907.

The time series can not be compared back to 1907, but are in many ways comparable back to late 1940's. For some variables there are breaks in the time series. From 1999 all activity are registrered in the municipality where the agricultural area is situated. Before 1999 the activity was registered where the farm was situated.

The questions about other gainful activities were introduced in 1999. In these 11 years, the more attention has been put on such activities and the questions have been adjusted. This might have influence on some of the results. For example the increase in number of holdings whice rent out hunting and fishing rights are not real. Probably the figures for 1999 are to low.

All surveys contains measuring errors, i.e. the respondent does not know the exact value or the questions are misunderstood.

At last deadline for data reporting, 98 percent had responded. Values for no response will be imputated from other sources (registers, other surveys) and by other statistical ways of data imputation.

Partial no response will be corrected either manually or automatically. Several automatically controls are ran in connection with other ways of imputation (cf. 3.5.)

All data on marital status are collected from registers. The register do not intercept all non marital cohabitations, so there might bed differences between information given on questionnaires and register. For example it might have been given information on labour input for both holder and spouse/cohabitant whilst the register "says" that the holder is single. When publishing results, we strictly use register data which makes it possible to link other information to the persons. 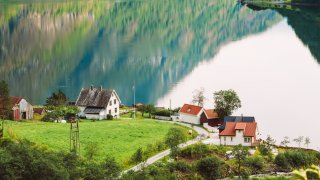 Holdings, agricultural area and livestock
The statistics give information about the number of agricultural holdings, their size and type of farming.