Decrease in river catch of salmon

The slaughtered catch amounted to 393 tonnes, consisting of 343 tonnes of salmon and 50 tonnes of sea trout and migratory char. Compared with 2015, the decrease was 3 per cent for salmon and 10 per cent for the two other species. 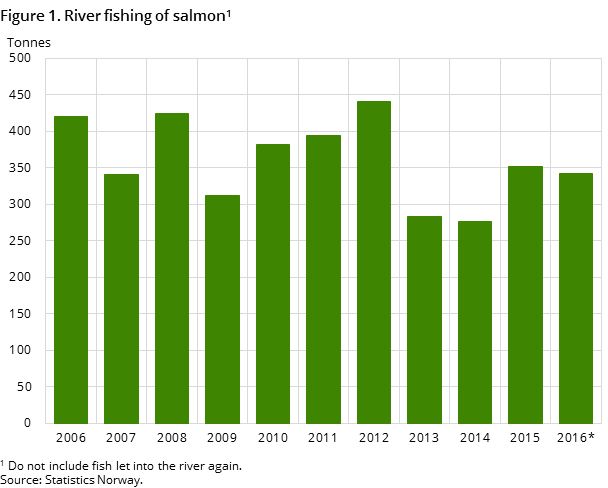 Tana and its tributaries was the most important river system in 2016 in terms of fish caught, with a total catch of 38.6 tonnes. This is 0.3 tonnes more than in 2015. Next in line were Gaulavassdraget and Namsenvassdraget. The ranking of the rivers is based on the total catch, including catch and release.

In 2016, 25 200 salmon and 11 700 sea trout and migratory char were caught and released into the river again. In this respect, Gaula and Orkla were the most important rivers, with catch and release of 2 800 and 2 500 fish respectively.

Nevertheless, Finnmark was the county where most fish were released into the rivers again; in total 6 000 salmon and 1 600 sea trout and migratory char. Next in line were Sør-Trøndelag and Nordland.

The average weight for catch and release salmon was 4.6 kg, and for sea trout and migratory char 1.0 kg.