Positive signals from the supplier industry

Norwegian industrial managers report a production level increase as well as growth in employment in the first quarter of the year. The positive trend is expected to continue in the second quarter, and especially for suppliers to the oil gas industry.

The business tendency survey for the first quarter of 2019 shows a positive development in total industrial production compared to the last quarter of 2018. The growth is particularly strong among producers of capital goods who report increased production, but also producers of intermediate goods and consumer goods gives a positive evaluation of the activity level in the first quarter.

Growth in oil investments and increased contract volume for the supplier industry have given rise to a higher level of activity and the industrial leaders now report increasing growth in employment in the first quarter of 2019.

New orders from the domestic market is increasing

The results from the first quarter indicate that the more export-oriented part of Norwegian industry has a somewhat weaker development in demand. Producers of intermediate goods still report an increase of numbers of new orders from the export market, but fewer managers than in the fourth quarter of the last year report growth.

Every quarter, for just over two years now, a price increase has been reported both in the home and export market. Hence the positive trend continues in the first quarter of 2019, with price growth in both markets for overall manufacturing. At the same time, industry leaders report a lower growth rate for export prices. Producers of consumer goods reported the highest growth rate for prices in both markets.

The general outlook for the second quarter of 2019 is clearly positive for overall manufacturing, but the numbers of leaders that looks optimistic about the coming quarter is somewhat lower than in the previous survey. Optimism is also reflected in the indicator for future investments, where it is reported that approved investment plans are adjusted upwards. The positive picture is supported by expectations of growth in employment, new orders and total stocks of orders for the second quarter. If we look at the different product types, it is producers of capital goods who have the most optimistic outlook for the coming quarter.

The share of managers reporting that weak demand and strong competition were limiting factors for production was reduced in first quarter of 2019. At the same time, there is an increase in the numbers of leaders who report that a lack of qualified labor force is a challenge in order to increase production further.

In figure 6 below shows how the indicators that represent resource shortage have increased since the bottom of 2016, while demand and competition represent a minor challenge for manufacturing. 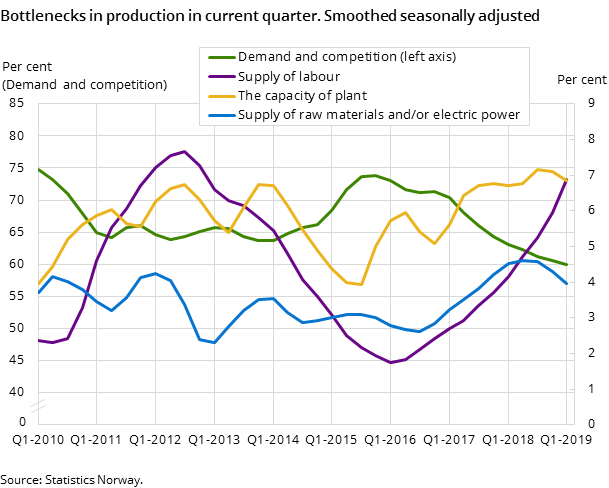 The average capacity utilisation for Norwegian manufacturing has declined slightly, and was calculated to 79.3 per cent at the end of the first quarter of 2019.The corresponding figure for the fourth quarter was 79.5 per cent. This is below the historical average of 80.2 per cent. International comparisons of average capacity utilisation are available from Eurostat (EU).

The survey data was collected in the period from 8 March to 23 April 2019.