According to Norwegian industrial managers, the increase in total output has grown weaker throughout 2019. The general outlook for the first quarter of 2020 is considered to be positive by the majority of industry leaders, but the share of optimists are lower than in the previous quarter.

For more than two years now it has been reported growth in price level both in the home and export market for overall manufacturing. After declining for some quarters, the growth rate in the fourth quarter of 2019 has increased somewhat in both markets. Producers of consumer goods and capital goods report growth in prices in both markets while the producers of intermediate goods reports increase in prices in the domestic market and unchanged prices in the export market.

Diminished optimism for the first quarter

The general outlook for the first quarter of 2020 is positive for overall manufacturing, but the numbers of leaders that looks optimistic about the coming quarter is lower than in the previous survey. Still, the industry leaders report upward adjusted future investment plans, and it is expected increase in new orders from both the domestic and the export market, but fewer leaders are sharing this opinion now than the previous quarter. However, the employment is expected to be unchanged in the first quarter of 2020. It is the producers of consumer goods who are most optimistic regarding overall manufacturing for the next quarter, while the producers of capital goods are now only moderate positive. Producers of intermediate goods now have a neutral view on the outlook for the first quarter. 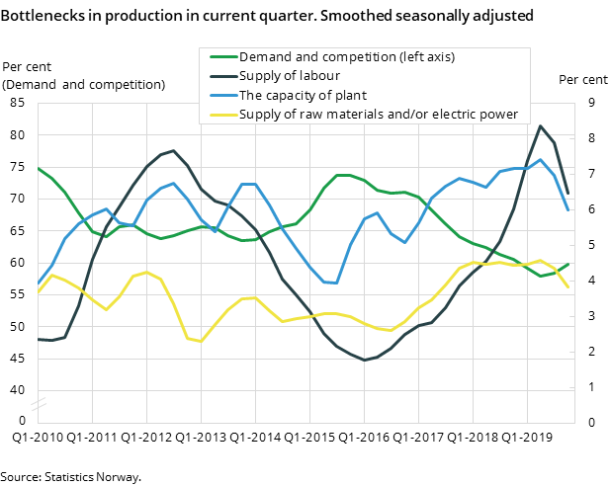