More men than women employed in almost all regions

According to the 2011 population and housing census, the employment rate in the age group 15-74 years was higher for men than for women, with 72 and 67 per cent respectively. This was the situation in all counties and in all but 17 municipalities. 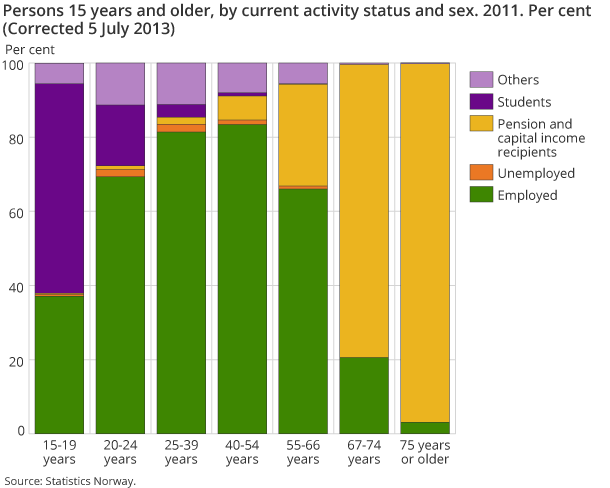 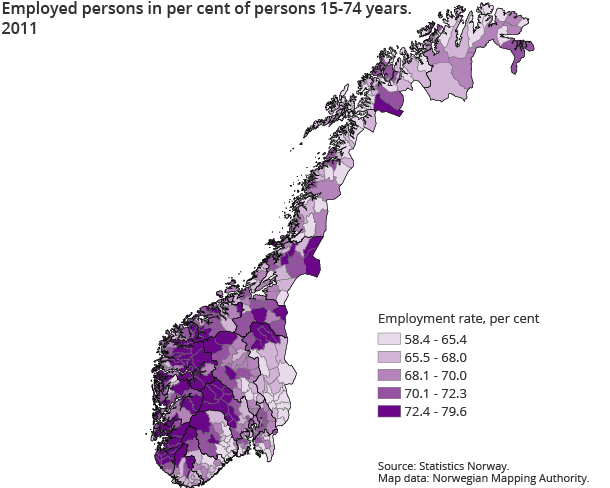 In 17 out of 429 municipalities the employment rate was higher for women than for men, and 13 of these municipalities were located in the two northernmost counties Troms and Finnmark.

The difference between employment rates for men and women was smaller in 2011 than 10 years earlier. For the age group 20-74 years the employment rate for men had decreased from 77 to 75 per cent, but for women the rate had increased from 68 to 69 per cent.

Increasing employment rates among the elderly

For the age group 15-74 years in total, employment rates were lowest for the counties of Østfold, with 64 per cent, and Hedmark and Telemark with 65 per cent. The corresponding rate for the country as a whole was 69 per cent.

The counties of Rogaland and Sogn og Fjordane had the highest employments rates, with 73 per cent. The two other counties in the west, Hordaland and Møre og Romsdal, as well as Akershus in the southeast, also had employment rates above 70 per cent.

When comparing employment rates between regions, the age distribution must be taken into account. Regions with a high portion of elderly will normally have lower employment rates.

Differences between urban districts in Oslo

Type of family has an influence on employment

In couples without children where only one of the partners was employed, the employed person was a man in 57 per cent of cases. For couples with children, the corresponding figure was much higher, at 78 per cent. This shows that the presence of children in the family has more influence on employment rates for women than for men.

One in five are pensioners recipents

In population censuses, persons aged 15 years and older who are not employed are classified by current activity status. Persons that are recipients of pensions or capital income are classified as pensioners. According to this classification, 22 per cent of the population aged 15 years and older were pensioners. The portion was higher for women than for men, 25 per cent and 18 per cent respectively. The main explanation is that women live longer than men and that most pensioners are elderly people. However, the portion of pensioners was higher for women than for men in all age groups. The difference between sexes was largest for the age group 67-74 years, with a percentage of 85 per cent for women and 73 for men.

Combining employment and education is common