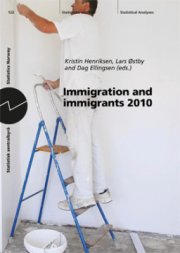 Open and read the publication in PDF (180 pages)

This publication deals with the scope of immigration to Norway, and the living conditions of immigrants and Norwegian-born to immigrant parents.

The analysis first describes the population structure by country background, gender, age etc. Population changes through immigration, emigration and population growth are then described. Finally, the reasons for immigration are explained. One important feature is the recent increase in labour immigration, only slightly affected by the financial crisis. How long the large influx from Central and Eastern Europe and Sweden will continue is not known, and the question of what will eventually happen with regard to family immigration or return migration remains unanswered.

The labour market and education are considered to be the most important arenas for the integration of immigrants. The analysis describes differences in employment levels among men and women by country background and length of stay in Norway. We also examine the employment among Norwegian- born to immigrant parents. A major increase in employment is found among immigrants up until 2008, after which a certain decline is observed. However, the gap with the rest of the population is less than pre-2005. The increase in unemployment due to the financial crisis was particularly applicable to immigrants from the new EEA member countries (such as Poland), and was perhaps just as much a reflection of the employment problems in the building and construction industry as of immigrants’ problems in the labour market.

We also look at incomes and the low-income group share in different immigrant groups, and particularly long-term low incomes. Many immigrant children grow up in families with a low income, and this situation often persists for a long period of time.

Norwegian attitudes to immigration and immigrants in the period 2001-2009 are relatively stable, but are partly influenced by fluctuations in the economy.

The analysis includes comparative data on European attitudes to immigrants. Norwegians are one of the most liberal groups in Europe, but the Swedes are far more liberal than us in relation to almost all areas of immigration. The analysis concludes with an overview of the data used for immigrant-related statistics, and presents a comprehensive overview of other immigrant-related statistics and analyses published by Statistics Norway.

In this series, Statistics Norway publishes analyses of social, demographic and economic statistics, aimed at a wider circle of readers. These publications can be read without any special knowledge of statistics and statistical methods.