Sharp rise in job insecurity for among oil workers

The proportion of employed persons who believe they are at risk of losing their job and who have experienced changes in the workplace has increased slightly over the last three years. The oil industry, however, has seen a sharp increase.

Twelve per cent of all employed persons were afraid of losing their jobs in 2016, an increase from 9 per cent in 2013. The proportion of employees who have experienced workforce cuts over the last three years has increased from 7 to 9 per cent, while the proportion that says they work in a company that has reorganised is 12 per cent, two percentage points higher than in 2013. However, in the past ten years, the proportion of employed persons who experience job insecurity has remained relatively stable.

Despite the fact that relatively few employees have experienced job insecurity in the form of cuts, reorganisations and relocations over the last three years, there are large variations between different industries and professions. The year 2016 was characterised by major restructuring in some industries, especially in the oil sector, where there have been almost 50 000 fewer in employment between 2013 and 2016. In the Survey on Work Environment 2016, this is reflected in the fact that there has been a sharp increase in the proportion of employees in the oil industry who believe they are at risk of losing their job, who have experienced workforce cuts, reorganisation or have been relocated. There is also an increase in the proportion seeking a new job. 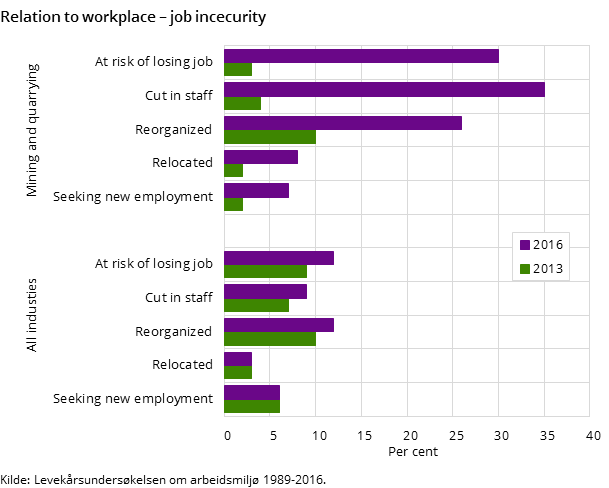 About 90 per cent of persons employed in the mining and quarrying industry work with the extraction of crude petroleum and natural gas. Changes in the oil industry will therefore have a major effect on the results for this industry. In this article we use the term oil industry for those employed here, but the population also includes a small proportion of employees in other types of mining and quarrying.

In 2013, job insecurity was not prominent among employees in the oil industry. Only 3 per cent were afraid of losing their jobs, 4 per cent had experienced staff cuts/downsizing and 2 per cent were searching for another job.

In 2016, the situation is reversed, and those employed in the oil industry are now among those who most often experience this kind of job insecurity. Thirty per cent say they are afraid of losing their job, 35 per cent have experienced downsizing that had a significant impact on their daily work, and the proportion seeking another job has increased from 2 per cent to 7 per cent. There has also been a significant increase among those who have been exposed to reorganisation in this industry, from 10 to 26 per cent. We must assume that these changes are linked to the major transformation that has taken place in the oil industry in recent years.

Job insecurity is also more evident in occupations that are specifically affected by the changes in the oil industry. Engineers, along with process and machine operators, are among those who are most likely to report they are at risk of losing their job, and these are occupations where staff cuts have also been evident.

Figure 3. Porportion of eployees at risk of losing their job. Percent

The National Institute of Occupational Health (STAMI) has documented that job insecurity is a risk factor that affects the working environment (STAMI 2013). It can affect the health and motivation of employees, and it has also been shown to be a risk to the psychosocial working environment, such as the relationship between management and employees and between colleagues. At the same time, these are risk factors that can be influenced by the involvement of the employees in the processes of change and by the amount of information the employees receive.

There are no or only minor changes from 2013 in the proportion of employees reporting psychosocial work environment problems that may be the result of transformations. However, in line with what we have shown above, there is a significantly higher proportion of oil industry employees reporting such problems, both in relation to employees in total and in 2013. Nearly four out of ten in this industry experienced poor relationships between employees and superiors, compared to three out of ten in 2013. The same change applies to those who state that managers become indignant if they criticise working conditions. The proportion of employees in the oil industry who do not receive information about important decisions, or who only receive such information to a limited extent, has doubled from 10 to 21 per cent from 2013 to 2016. Employees in the oil industry who report such problems now also exceed the average for all employees, while in 2013 they were less likely to report such problems than employees as a whole. 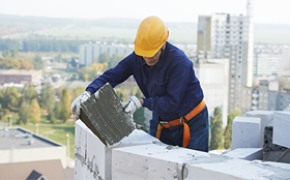 The share of employed persons that are exposed to various physical strains at work has fallen in recent decades. Fewer people carry out heavy lifting, work in poor indoor climates or are exposed to passive smoke. We also find that several job-related health problems have become less common.