Almost 31 500 immigrants were registered as unemployed at the end of February 2017, which is the reference time of the 1st quarter. This constitutes 37 per cent of the registered unemployed in total. 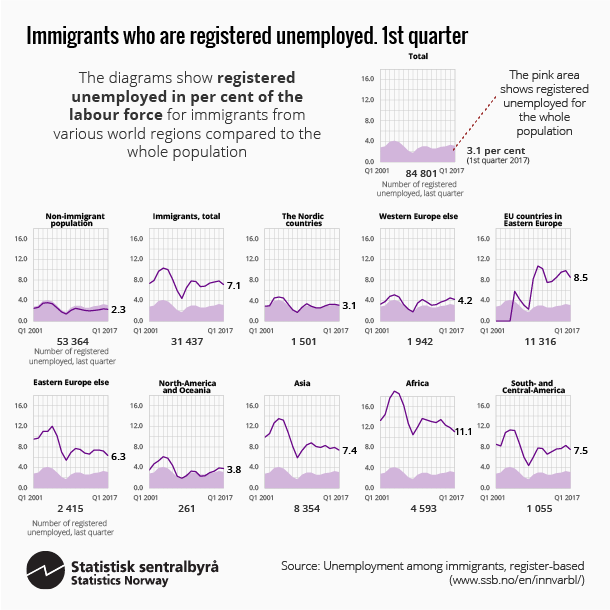 African immigrants still have the highest unemployment rate, at 11.1 per cent in the 1st quarter, which is due to the large percentage of refugees within this group. Next were immigrants from the EU countries in Eastern Europe at 8.5 per cent. The immigrants from Asia and Latin America had 7.5 and 7.4 per cent respectively, while those from Eastern Europe outside the EU had 6.3 per cent registered unemployed. As usual, the remaining groups had rates far below the immigrant average: Western Europe (4.2 per cent), North America and Oceania (3.8 per cent) and the Nordic countries (3.1 per cent).

Figure 2. Immigrants who are registered unemployed, by county of residence. In per cent of the labour force

Lower unemployment among Norwegian-born to immigrant parents than immigrants

Norwegian-born to immigrant parents is still a rather small group of unemployed persons. This group constituted 1 174 registered unemployed persons in the 1st quarter of 2017. A large share of this group is aged 15-29 years, and the unemployment rate within this age group was 4.1 per cent. Immigrants and the rest of the population at the same age had 8.2 and 3.2 per cent unemployed respectively.

Both Norwegian-born to immigrant parents and the rest of the population aged 15-29 years had a decrease of 0.7 percentage points, while there was a decline of 1 percentage point among immigrants.